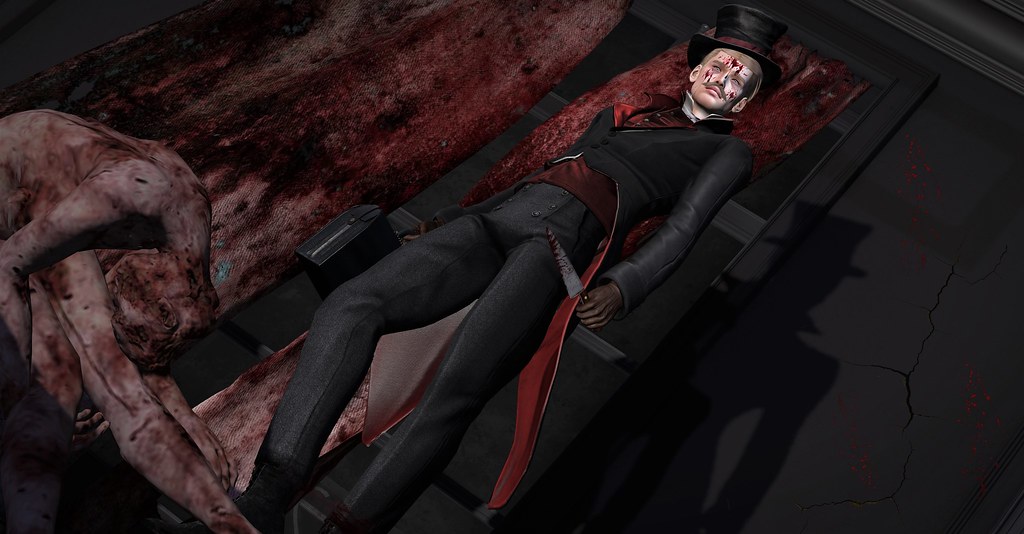 Freddy Mongrain has added a photo to the pool:

Jack the Ripper is an unknown serial killer who was active during the summer and autumn of 1888 in and around the Whitechapel district of London. His modus operandi involved exclusively female victims, chosen from among the prostitutes of the Whitechapel. The victims were slaughtered by slashing their throats, then the murderer ravaged their bodies, mutilating them and removing internal organs. To represent this murderer, MR SL ♛ Italy has chosen to create a night street scene with the typical London fog and snow strewn with the mutilated corpses of his victims. To complete his outfit MR SL ♛ Italy is wearing a tophat with a red sash; a black tailcoat jacket with red silk lapels complete with the characteristic "dovetails;" a red waistcoat a shirt and a white foulard tie, classically cut cuffless black high-waisted trousers and lace-up leather boots with cleats, all in keeping with the style of the nineteenth century. This outfit was created by Hotdog Store. MR SL ♛ Italy has completed his style with a bloody knife from Angry Store and a typically doctor-style bag from ANTINATURAL Store. On his face he has blood splatters from LE: MON store, mustache from LeLutka store and elegantly cut hair from Modulus store.

Thanks for your attention MR SL ♛ Italy